Worship and Communion
Services
Sundays
9:30 am 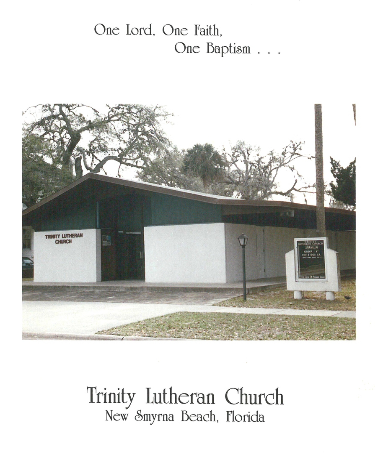 In 1951, God placed in the hearts of a small group of people the desire to see a Lutheran congregation in New Smyrna Beach.  In October of that year, eight Lutherans first gathered for worship.  They met at the home of Mary Maier.

Two years later, Pastor Lynn Wilfrid was called to be the mission/developer for this new congregation.  The first formal worship service was conducted in the Chamber of Commerce building on Canal Street in September 1953 with sixty-seven persons in attendance.

A two-story house on Riverside Drive (at the corner of Downing Street) was purchased and on September 26, 1954, members processed from the Chamber of Commerce building to that house, which was known as "Luther Hall," for a service of organization and dedication.  There were 105 charter members.  There are no charter members still living.  Myrtle “Myrt” Jordan is our longest continuous member, having joined Trinity on December 1, 1957.

The remaining property of that block was purchased and the first church building was consecrated in October 1961.  Rev. Joseph Huntley was pastor.   During this time, the two-story house at the corner of Riverside Drive and Douglas Street (at the south end of the block) served as the Parish House.  The church offices, meeting rooms, and classrooms were located there.  That building is now the “Harris House,” part of the Atlantic Center for the Arts.  The “Riverside on the Park” condos now occupy the area where the church building and Luther Hall were located.  This property is across from Riverside Park, and one block north of the south causeway.  When the church building was constructed, Luther Hall was torn down to make room for a parking lot.

In February 1970, Trinity became a self-supporting congregation and made numerous additions and improvements to the church property.  Rev. William Renn was pastor.

Thirteen years later, in 1983, the congregation began to feel the need for a new church building.  In 1986, the mortgage on the Riverside Drive church was paid off and the Turnbull Bay Road property was purchased.

Four years later, groundbreaking for the fellowship hall and offices at the new site was held and on September 2, 1990 the last service was held at the Riverside Drive church, with members taking hymnals and altar vessels to the new facility as part of the service. The first service was held in the new fellowship hall on Turnbull Bay Road on September 9 with groundbreaking for the new worship space the very next week. On February 24, 1991, a service of dedication was celebrated in our new worship space.  Rev. Perry Griffith was pastor.

In 1998, the mortgage on our current church facility was paid off.  The congregation celebrated with a mortgage burning ceremony on Reformation Sunday.  Rev. Louis Trebus was pastor.

While a listing of these dates and events in the life of the congregation is interesting, the real story of Trinity is the people who God has used to minister to the needs of this community.  “God’s work.  Our hands.”  We cannot possibly name all the people who have contributed over the years to the history of Trinity Lutheran Church, but they are each known to God and each in his or her own way has added to the richness of our ministry as God’s people, a ministry of “making Christ known to our neighbors and the world through word and deed.” 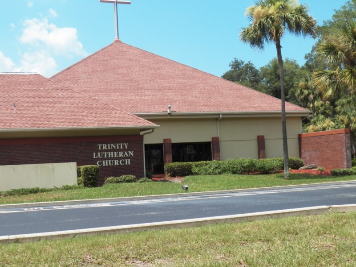